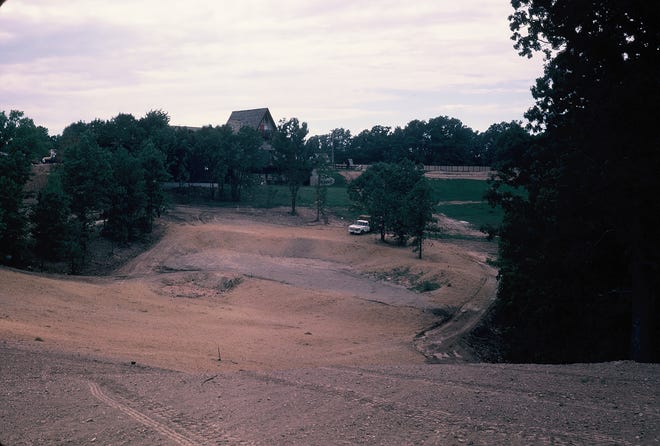 Golf at Lake of the Ozarks

As we celebrate the 90th anniversary of the Bagnell Dam this summer, let’s take a closer look at the history of golf in the Lake District. How has the construction of the dam affected the area, and in particular, the construction of courtyards in the area over the years?

As the water began to fill and form the Lake of the Ozarks, the communities around the newly formed lake began to develop, and with that, golf arrived in the area.

In 1962, the Turkey Bend Poultry Farm at Osage Beach was transformed into the Dogwood Hills Golf Course. It was the first 18-hole course and the first course to feature regulation turf greens and really kicked off the three decades of golf course construction in the area. Dogwood Hills had a 52-year run but closed in 2014 to make way for development.

In 1969, two new courses were built and ready to play. The Camdenton Golf Club has been replaced by the Lake Valley Country Club, a private, member-owned 18-hole facility, and the Hidden Lakes Golf Course, now the Margaritaville Lake Resort’s 9-hole course, has opened. at Tan-Tar-A Resort. in preparation for the 1970 National Governors Conference held at the complex.

Construction of the golf course slowed down in the 1970s with the economic downturn, but in 1980 two new 18-hole facilities opened in the area with designers named Robert Trent Jones Sr., Bruce Devlin and Robert Von Hagge. The Trent Jones Cove course opened in 1979 at the Lodge of Four Seasons. By 1980, the Tan-Tar-A ski slopes were gone and the Devlin / Von Hagge designed Oaks Golf Course opened. These two courses transformed the landscape from golf to lake and throughout the 1980s were the jewels of the region. Each course has hosted numerous collegiate tournaments and other regional events that have placed the lake in the golfing landscape of the Midwest. At the end of the decade, the west shore of the lake opened a new 9-hole course called Indian Rock, which then expanded to 18 holes in the mid-90s.

The 90s was the decade of the golf boom across the country, and the Lake District saw five new courses opened and three more expanded. In 1991, the 9-hole course called Bay View debuted on Y Road in Linn Creek, but then closed in 2010. The Lodge of Four Seasons opened its second 18-hole championship course, the Ridge. In 1992, North Port National, known today as Osage National, opened its original 18-hole course designed by Arnold Palmer to receive rave reviews and a set of skins featuring Arnold, Lee Trevino and the Missouri natives Payne Stewart and Tom Watson. In 1999, Sycamore Creek opened its original 9-hole course and expanded it to 18. In 2016, Sycamore Creek closed after 21 years. Indian Rock and Osage National had also expanded to 18 and 27 holes respectively by the turn of the century. 1999 also saw the opening of Tom Weiskoph’s signature 18-hole course, The Club at Old Kinderhook. The club is located on land formerly known as Empire Ranch, which 30 years earlier was days away from becoming the site of the Lake Valley Country Club before their existing site was secured.

The turn of the century brought the last extension of the course to the Lake of the Ozarks. Bear Creek Valley opened in 2001 on land that was once a 250 acre oak and hickory farm. The Redfield Golf Club opened in Eugene in 2001 and featured the area’s first course with Bent Grass fairways. Jack Nicklaus’ signature course, the Porto Cima Club, also opened in 2001 with Jack himself here for the grand opening. The Porto Cima Club has since been the gold standard in the lake region. The final piece was The Club at Deer Chase which opened in 2004 to complement the golf courses of Lake of the Ozarks.

Golf has played an important role in the history of the lake for almost 90 years, but none of its growth and success would have been possible without the construction of the Bagnell Dam. Here’s to wish Bagnell Dam the best party for Dam’s 90th birthday this summer!