At least two children and one adult have sought medical attention with suspected cases of salmonella poisoning following a massive recall of Strauss products ranging from chocolate to ice cream, pudding, cookies and other snacks over fear contamination.

According to Hebrew media, two children who recently sought treatment at Assuta Medical Center in Ashdod are suspected of salmonella poisoning, pending full lab results. Additionally, a man who was treated at an urgent care facility in Bnei Brak with relevant symptoms said he had recently consumed some of the infected products.

Health Minister Nitzan Horowitz said on Tuesday the incident would be fully investigated and the plant would not be allowed to resume operations until it was fully cleaned up.

“Elite-Strauss’ chocolate factory will not return to production until we can reach an unequivocal conclusion that it can produce products that are healthy, clean and pose no threat to the public,” Horowitz said, adding that the story is “a great example of why we need regulation and why government needs to be the controller.

Amid the massive recall, the Department of Health said on Tuesday that the company first identified traces of salmonella at its facilities a week ago, but has suspended the recall until full test results are available. tests have returned – actions in line with ministry guidelines.

The ministry also warned the elderly and immunocompromised to watch out for signs of salmonella poisoning and anyone with symptoms to seek medical attention. He noted that in the vast majority of cases, those with symptoms make a full recovery within two or three days.

The Strauss Group, one of Israel’s largest food makers, said Monday that many popular chocolate products made by its subsidiary Elite would be recalled due to fears of salmonella contamination. The move is considered the largest food recall ever in Israel and spanned dozens of products.

The Ministry of Health on Tuesday confirmed media reports that concerns first emerged on April 19, when routine tests “showed the presence of salmonella in the production area but not in the food products sampled. at the factory”.

The company was ordered to carry out additional inspections and a first test carried out on April 21 revealed the presence of salmonella in the raw materials used at the factory. It was only after the full lab test confirmed the initial findings on Sunday afternoon that the Strauss Group issued the recall, the ministry said.

Hebrew media claimed that the final test results were delayed due to Passover, which was celebrated last week and during which many offices and operations are closed or operating at limited capacity.

The ministry stressed that the chocolate product recalls were issued as a precaution and that final lab results on those items were expected on Wednesday.

He said he ordered the company to investigate the cause of the incident and take corrective action to prevent future cases. He also said the factory would only resume production after an investigation, preventive actions and full disinfection, inspection and new lab tests. 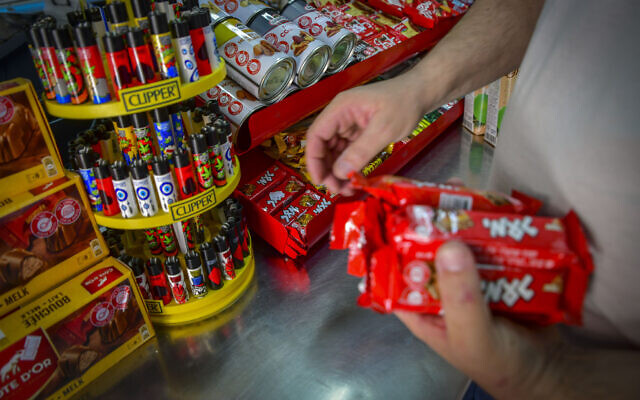 Affected products include some of Israel’s most popular snacks: Pesek Zman bars (those best consumed before December 1, 2022 to April 1, 2023), Reva L’Sheva bars (best consumed before between May 1, 2022 and December 15, 2023), Kif Kef, Taami, Egozi and Energy bars (to be consumed preferably before July 1, 2022 to January 1, 2023), Parra chocolate bars (to be consumed preferably before October 1, 2022 to April 24, 2023) — all produced by Elite. The recall was later expanded to include milk chocolate pudding topped with chocolate lentils as well as a wide range of ice cream products, added out of caution due to the inclusion of some Elite chocolate products.

Customers with items suspected of containing the bacteria are urged to contact Strauss on its website or via customer service on *6860.

In an interview with Channel 12 news on Monday night, Strauss Group Israel CEO Eyal Dror apologized to the public but insisted the company had done nothing wrong.

“Last week we received a first indication of salmonella in our liquid chocolate tanks, which is the raw material we use to make our products,” he said. “At that point, we stopped the process and informed the Ministry of Health, before launching a series of tests,” Dror added, noting that the decision to close the plant, located in the Galilee region, in northern Israel, was taken by the company. and not by the Ministry of Health.

“It was only yesterday morning that we received information indicating that the bacterium could be in finished products, which have not left the factory”, he explained, “which means that ‘At this point, we still don’t know of any product on the market that is even suspected of containing salmonella,’ he said.

We tell a critical story

Israel is now a much bigger player on the world stage than its size suggests. As a diplomatic correspondent for The Times of Israel, I am well aware that Israel’s security, strategy and national interests are always under scrutiny and have serious implications.

It takes poise, determination, and knowledge to accurately convey the story of Israel, and I come to work every day aiming to do just that.

Financial support from readers like you allows me to travel to witness both the war (I have just returned from a report in Ukraine) and the signing of historic agreements. And it keeps The Times of Israel the place readers around the world turn to for accurate information about Israel’s relationship with the world.

If it’s important to you that independent, factual coverage of Israel’s role in the world exists and thrives, I urge you to support our work. Will you join the Times of Israel community today?

You are a dedicated reader

We’re really glad you read X Articles from The Times of Israel over the past month.

That’s why we started The Times of Israel ten years ago – to provide discerning readers like you with must-read coverage of Israel and the Jewish world.

So now we have a request. Unlike other media, we don’t have a paywall in place. But since the journalism we do is expensive, we invite readers to whom The Times of Israel has become important to help support our work by joining The Times of Israel community.

For just $6 a month, you can help support our quality journalism while benefiting from The Times of Israel WITHOUT ADVERTISINGas well as access Exclusive content only available to members of the Times of Israel community.

Thanks,
David Horovitz, founding editor of The Times of Israel